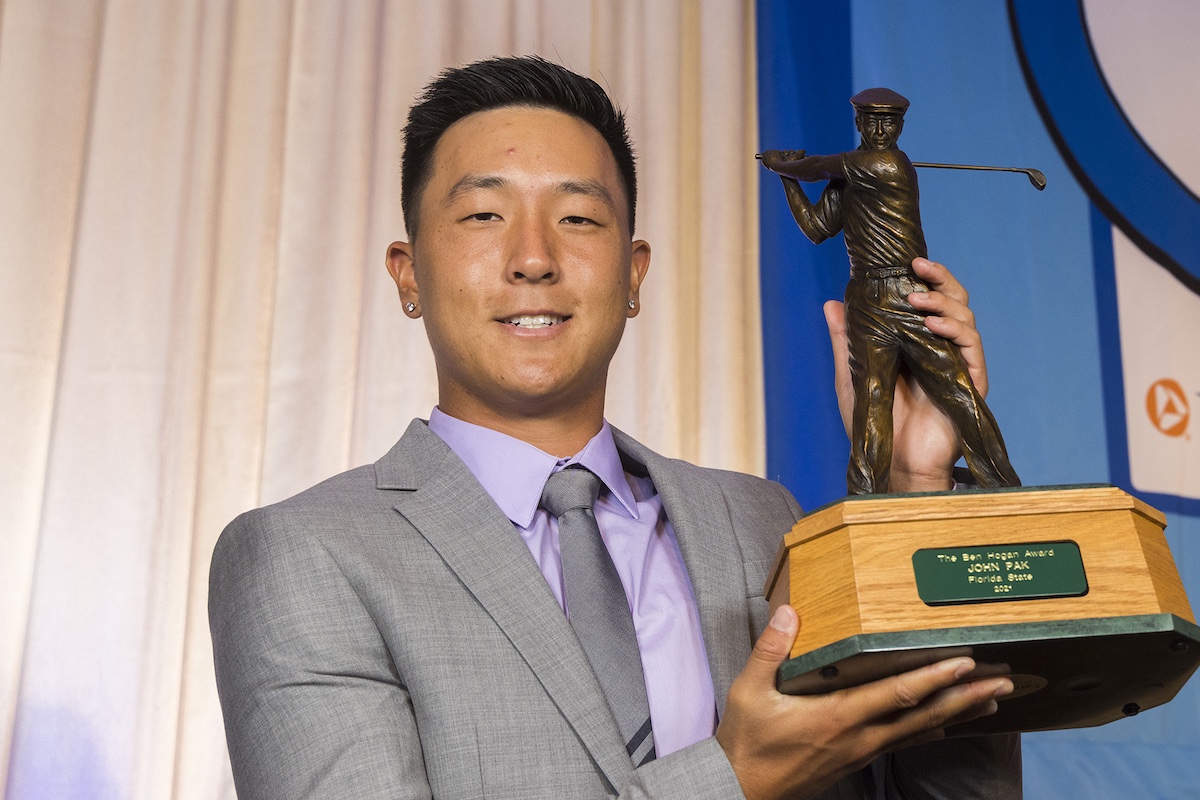 FORT WORTH, Texas, June 4, 2020 – Florida State senior John Pak has been named the 2021 recipient of The Ben Hogan Award. The annual award – which seeks to honor the top men’s college golfer based on collegiate, amateur and professional events over the previous 12 months – was announced this afternoon at a luncheon honoring the three finalists at Colonial Country Club.

Pak is the first winner from Florida State and the first recipient from the Atlantic Coast Conference since Clemson University’s Kyle Stanley in 2009. Pak, the ACC Player of the Year, also was named a PING First-Team All-American.

The product of Scotch Plains, N.J., Pak is ranked No. 1 according to the Golfstat college rankings and is ranked second in the Golfweek/Sagarin rankings. Additionally, he currently ranks third in the Scratch Players World Amateur Ranking and fourth in the World Amateur Golf Ranking. Pak also finished first in the PGA TOUR University rankings to earn full Korn Ferry Tour membership beginning with next week’s BMW Charity Pro-Am.

Pak earned the silver medal as the low amateur at the 2020 U.S. Open, placing 51st, and was the only amateur in the field to make the cut. Pak was a member of victorious Team USA at the 2021 Walker Cup and also was a member of the U.S. contingent at the 2020 Arnold Palmer Cup. He also was the Ben Hogan Award’s September Golfer of the Month and a semifinalist for the yearly award in 2020.

In college play, Pak picked up his school-record-tying eighth career victory at the Calusa Cup in April. In the 2020-21 season, he registered top-12 finishes in all 10 tournaments while posting a 69.71 scoring average. He placed fifth individually at the NCAA Championships earlier this week and also placed among the top five in the Seminoles’ other two postseason events, the ACC Championships (T-5) and NCAA Tallahassee Regional (4th).

The group of three finalists honored at Colonial on Friday afternoon included Pak, University of Texas junior Pierceson Coody and University of Georgia senior Davis Thompson. Pak was chosen by an esteemed selection committee made up of more than 30 leaders and experts in college, amateur and professional golf. In addition, all past award winners were eligible to vote in the final round, casting a ballot to rank the three finalists.

A total of $48,000 in scholarships for the golf programs at Florida State ($24,000), the University of Texas ($12,000) and University of Georgia ($12,000) will be distributed. Pak also was extended the first invitation into the PGA TOUR’s 2022 Charles Schwab Challenge from tournament chairman Jim Whitten.

The Ben Hogan Trophy was first issued by the Friends of Golf (FOG) in 1990 at Bel-Air Country Club in Los Angeles, which at that time also included academic achievement in its original list of standards. In 2002, the award moved to Hogan’s hometown and the site of five of his PGA TOUR victories, Fort Worth, Texas; and began recognizing the top amateur and collegiate golfer. Since then, winners of The Ben Hogan Award Presented by PNC Bank have combined to accumulate 44 PGA TOUR victories and more than $265 million in prize money on the tour.

In addition, finalists attending the ceremony over the past decade include some of the game’s biggest stars, including three players currently ranked among the world’s top 35—No. 6 Collin Morikawa, No. 23 Jordan Spieth and No. 31 Matthew Wolff.

Since 2002, the Hogan Trophy Award Foundation has awarded more than $825,000 in scholarships to more than 30 universities. For more information on The Ben Hogan Award Presented, visit TheBenHoganAward.org and follow @BenHoganAward on Twitter, Facebook and Instagram.