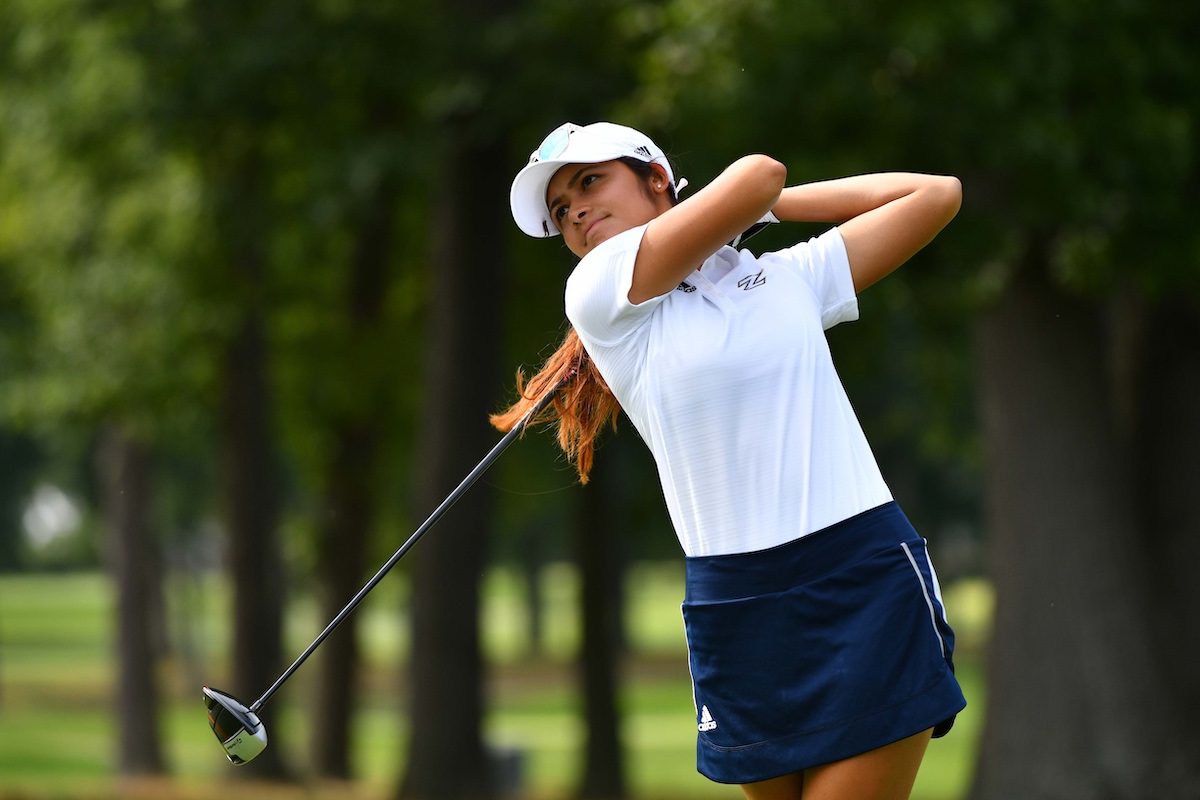 DAYTONA BEACH, Fla. (May 13, 2021) – University of Akron sophomore Ivana Shah has been named the 2021 Dinah Shore Trophy award winner, bolstering her status as one of the top collegiate female players who has made an impact on the golf course with her leadership and in the community through charitable endeavors.

Administered by the LPGA Foundation, the Dinah Shore Trophy recognizes women’s golf student-athletes who excel in academics (3.2 on a 4.0 scale) and athletics—playing at least 50% of the team’s scheduled events, while maintaining a scoring average of 78 or less. Nominees must also demonstrate outstanding leadership skills and community service.

“It is such an honor to be the recipient of the 2021 Dinah Shore Trophy award,” said Shah, a two-time Women’s Golf Coaches Association (WGCA) All-American Scholar. “Winning this award proves to me that no matter how bad things may seem in life, we can always do more to serve and support those around us. I am so grateful that I have the opportunity to play the sport I love, while also receiving an amazing education.”

A native of Mumbai, India, Shah is a leader in the classroom and on the golf course. She is the captain of the women’s golf team and a two-year Student-Athlete Advisory Committee member. Shah boasts a 3.902 GPA and is on track to graduate in 2022 with a Bachelor of Science in biomedical engineering.

Inside the ropes, Shah owns a trio of top-10 performances in her Zips career. She tied for ninth at the 2019 Colonel Classic as a freshman and then tied for seventh as a sophomore at the 2019 Fall Preview before an outright fifth-place result at the 2021 MAC Championship as an academic junior. A two-time MAC Golfer of the Week selection, Shah has led the Zips’ lineup in scoring for nine tournaments during her career.

Away from the course and classroom, Shah is the co-founder of Call To Action based in Akron, Ohio. It is a volunteering organization that strives to bridge the gap between eager volunteers and non-profit groups. For volunteers, they organize opportunities to desired non-governmental organizations and for the non-profits, Call to Action serves as a one-stop resource to deliver volunteers as needed. They aim to alleviate any struggles that non-profit groups face when searching for volunteers. You can follow the organization on Instagram @calltoactionakron.

“I co-founded Call To Action with the mission to help the less fortunate in my community, hoping that I could encourage more students to do the same,” Shah said. “I would like to thank my parents, coach, team and all those that support me. I would especially like to thank the LPGA Foundation and Friends of Golf for this award and donation.”

The LPGA Foundation announced the Dinah Shore Scholarship Fund in March 1994 in honor of the late Dinah Shore, a Vanderbilt University graduate and an honorary member of the LPGA and World Golf Halls of Fame. The Dinah Shore Trophy Award has contributed more than $200,000 to women’s collegiate golf programs since its inception.

About the contributing organizations:

Friends of Golf (FOG) is a fundraising organization founded and administered by Eddie Merrins, golf professional emeritus at Bel-Air Country Club in Beverly Hills, Calif. FOG contributes annually to collegiate, high school and junior golf programs throughout the country, and Dinah Shore was considered the “First Lady” of FOG.

A part of the LPGA Tour since 1972 when it was founded by entertainer Dinah Shore, the ANA Inspiration (initially the Colgate-Dinah Shore Winner’s Circle and more recently the Kraft Nabisco Championship) was designated as a major in 1983. Three-time champion Amy Alcott began a winner’s tradition of jumping into the lake at the 18th hole after her victory in 1991. The event was called the Colgate Dinah Shore from 1972-81 and the Nabisco Dinah Shore from 1982-99. Dinah Shore’s legacy and heritage is preserved with the “Dinah Shore Walk of Champions” at the 18th hole at Mission Hills Country Club. In addition, a statue of Dinah Shore, serving as the walk’s focal point, was created by noted sculptor George Montgomery, who was Shore’s former husband.

Established in 1991, the LPGA Foundation is a 501(c)(3) charitable organization committed to empowering and supporting girls and women through developmental and humanitarian golf initiatives. Key priorities include: LPGA*USGA Girls Golf, the LPGA Leadership Academy, scholarships and the Dolores Hope LPGA Financial Assistance Initiative for those in the golf industry who are experiencing severe hardship. The LPGA Foundation is supported by corporate and private donations, foundation grants and contributions from LPGA members. For more information on how to contribute to the LPGA Foundation, please contact LPGA Headquarters, 100 International Golf Drive, Daytona Beach, FL 32124, or by phone, +1 386-274-6200 and on the web at https://www.girlsgolf.org/donate-foundation.

The LPGA is the world’s leading professional golf organization for women. Founded in 1950 and headquartered in Daytona Beach, Fla., the association celebrates a diverse and storied membership with more than 2,300 Members representing more than 30 countries. With a vision to inspire, empower, educate and entertain by showcasing the very best of women’s golf, LPGA Tour Professionals compete across the globe, while the Symetra Tour, the official development and qualifying tour of the LPGA, consistently produces a pipeline of talent ready for the world stage. Additionally, LPGA Professionals directly impact the game through teaching, coaching and management.

The LPGA demonstrates its dedication to the development of the game through the LPGA Foundation. Since 1991, this charitable organization has been committed to empowering and supporting girls and women through developmental, humanitarian and golf community initiatives, including LPGA*USGA Girls Golf, the LPGA Women’s Network and the LPGA Amateur Golf Association.

Follow the LPGA on its television home, Golf Channel, and on the web via www.LPGA.com. Join the social conversation at www.facebook.com/lpga, www.twitter.com/lpga, www.youtube.com/lpgavideo, and on Instagram @lpga_tour.