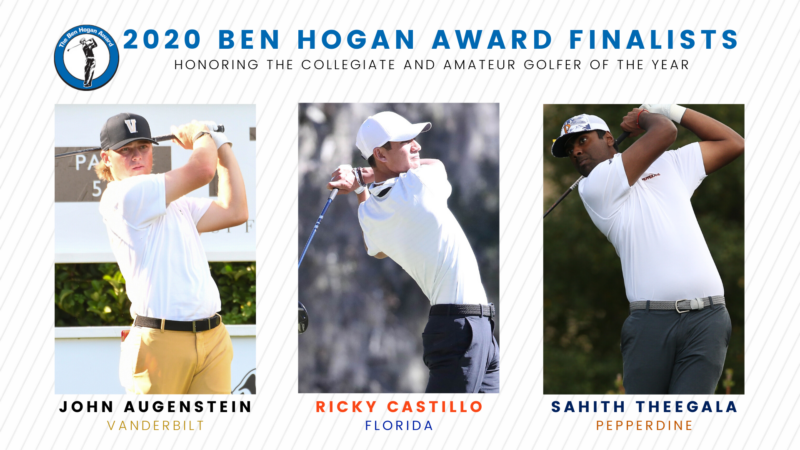 2020 Ben Hogan Award To Be Announced Tuesday During Presentation Special

The show, hosted by Brian Estridge, is set for 7 p.m. (CT) and will be streamed live on www.thebenhoganaward.org, www. friendsofgolf.org and on the award’s Facebook page www.Facebook.com/BenHoganAward.

The three finalists for the award are Vanderbilt senior John Augenstein, Florida freshman Ricky Castillo and Pepperdine senior Sahith Theegala. The Ben Hogan Award is given annually to the top men’s college golfer taking into account all collegiate, amateur and professional competitions over the past 12 months. The selection committee is made up of 30 leaders and experts in amateur, college and professional golf as well as past Hogan Award winners.

The Ben Hogan Trophy was first issued by FOG in 1990 at Bel-Air Country Club in Los Angeles and also included academic achievement in its original list of standards. In 2002, the Ben Hogan Award moved to Colonial Country Club in Fort Worth, Texas, Hogan’s hometown and the site of five of his PGA TOUR victories. At that time, it revised its criteria to its current standard of honoring the outstanding amateur and collegiate golfer.

Konica Minolta Business Solutions U.S.A., Inc. is reshaping and revolutionizing the Workplace of the Future™ with its expansive smart office product portfolio from IT Services (All Covered), ECM, Managed Print Services and industrial and commercial print solutions. Konica Minolta has been recognized as the #1 Brand for Customer Loyalty in the MFP Office Copier Market by Brand Keys for thirteen consecutive years, and is proud to be ranked on the Forbes 2017 America’s Best Employers list. The World Technology Awards recently named the company a finalist in the IT Software category. Konica Minolta, Inc. has been named to the Dow Jones Sustainability World Index for eight consecutive years. It partners with its clients to give shape to ideas and work to bring value to our society.