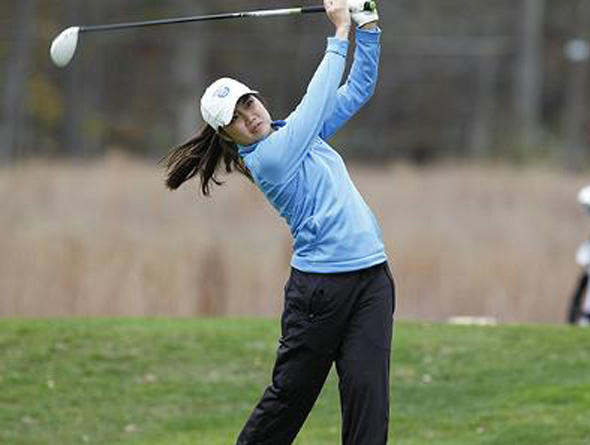 Chulya Named The Recipient Of The 2016 Dinah Shore Trophy

DAYTONA BEACH, FLORIDA, May 18, 2016 – Jackie Chulya of Columbia University has been selected as the recipient of the 2016 Dinah Shore Trophy. Chuyla hails from Bangkok, Thailand, where she devotes most of her summers working and volunteering in her community.

Administered by the LPGA Foundation, the Dinah Shore Trophy Award recognizes female collegiate golfers who excel in both academics (3.2 on a 4.0 scale) and athletics – playing in at least 50 percent of the team’s scheduled events – while maintaining a 78.00 or less scoring average. In addition, nominees must demonstrate outstanding leadership skills and community service.

As a junior, Chuyla was unanimously named the 2016 Ivy League Player of the Year after finishing with the second-best scoring average in program history (74.95). She set the single-season record for the most birdies made (62) and Par-4 scoring (4.16) and was also named the co-winner of the William Terminello award, most valuable player of the Columbia Women’s Golf Team.

Chulya is not only is a major contributor to her golf team, but she is heavily involved in her school’s Student Athletic Advisory Committee (SAAC) and Thai Club. As vice president of Thai Club, she promotes Thai culture across the campus through food festivals, carnivals and study breaks. While excelling in golf and staying involved at school, Chulya maintains a 3.82 GPA.

The LPGA Foundation announced the Dinah Shore Scholarship Fund in March of 1994 in honor of the late Dinah Shore, Vanderbilt University graduate and an honorary member of the LPGA and LPGA Tour Hall of Fame. The Dinah Shore Trophy Award has contributed more than $174,000 to women’s collegiate golf programs including this year.