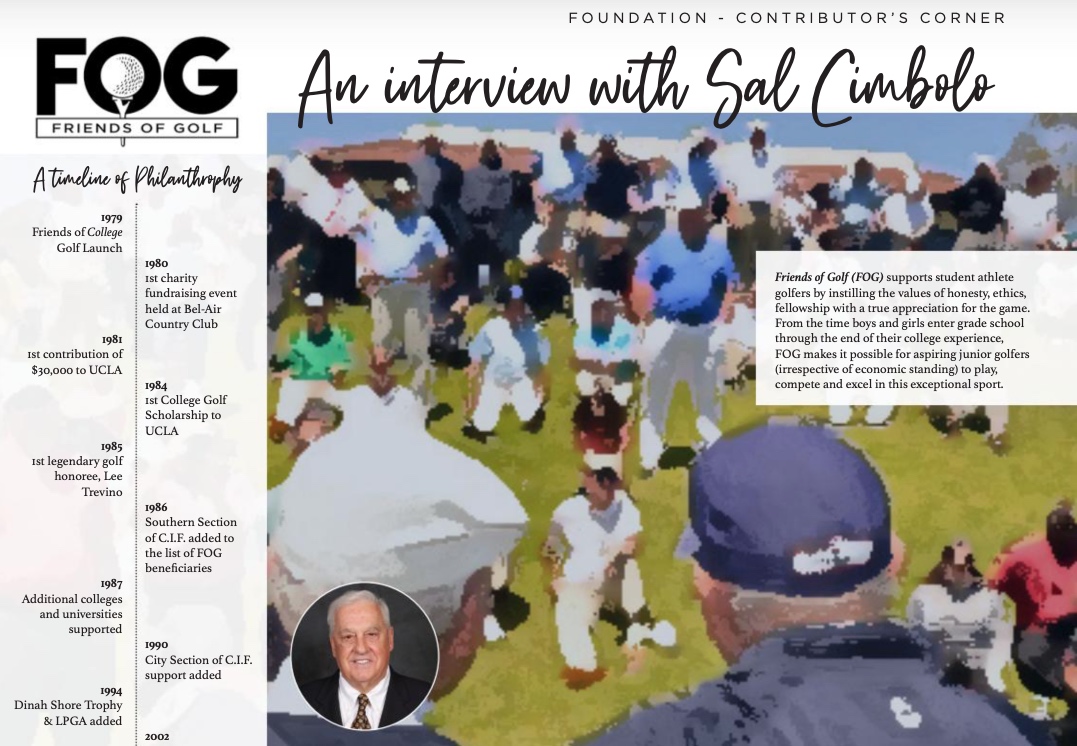 Sal Cimbolo is the Chairman and CEO of Friends of Golf

Friends of Golf (FOG) supports student athlete golfers by instilling the values of honesty, ethics, fellowship with a true appreciation for the game.  From the time boys and girls enter grade school through the end of their college experience, FOG makes it possible for aspiring junior golfers (irrespective of economic standing) to play, compete and excel in this exceptional sport.

Flashback to when you were 10 years old. What did you want to be when you grew up?
I grew up in the Baltimore area and wanted to be shortstop or center field for the Orioles.  I played a lot of baseball and had the same dream as the average 10-year old.

Tell me about how you got into your line of work.
I was in office technology.  Right after college, I was hanging out in my apartment and my roommate’s friend was boasting about the copy industry and how much money he was making.  So I gave it a shot and made so much money in the first six months, it became my first career.  Later, a few jobs brought me to the west coast.  I became a member of Bel-Air Country Club in the late 70’s, where I met Eddie Merrins, founder of FOG, along with John Anderson of UCLA (and FOG co-founder).  I didn’t become FOG President until the early 2000’s, followed by Chairman and CEO in 2013/14 when John Hoffman took a more active role as President.  FOG started as Friends of College Golf to help Eddie at his college golf program at UCLA, but then became Friends of Golf when it started supporting the CIF (high schools).  We also implemented the TWIG (Turn Wood and Iron into Gold) program with the L.A. and Southern Sections of CIF.

How did you hear about the SCPGA Foundation?
About 5 years ago, the Foundation made a presentation about all the great things you were doing and could look forward to doing with our help.  A proposal was then presented to the FOG Board and everyone enthusiastically said, “Yeah!”

What are you most proud of with our relationship?
I would say I’m most proud of the fact that we’ve extended our reach throughout the junior golf community.  It’s been the building blocks over the years—having an almost all-volunteer crew and our signature annual fundraising event.  We couldn’t be happier—we’ve started to receive donations through people’s wills and instituted a Champion’s dinner.  Essentially, the expansion into junior golf with SCPGA allows FOG to have an imprint from the time a young boy or girl touches a club right through their college experience.

What’s a goal you have for Friends of Golf that you hope to accomplish in 2020?
I would love to work on getting more areas involved, like Northern California and Chicago.  Expanding the FOG footprint.  There’s only one board meeting per year and our almost all-volunteer crew to get everything accomplished… so baby steps.  Steadily growing towards solidifying our national reach every year, to generate more revenue, so that we can continue to support even more youth.

Finish this sentence.  On Sunday mornings, you can usually find me…?
Spending time with my family.  Sunday is a family day, always has been.