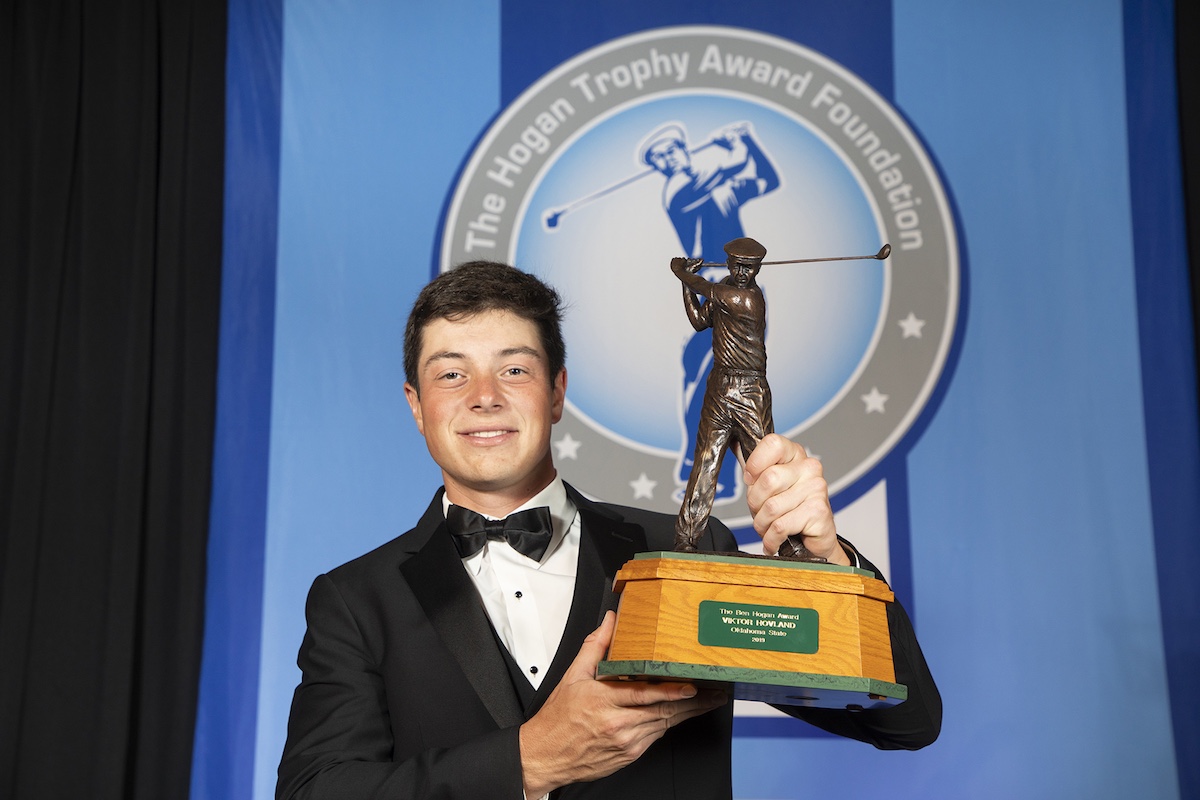 Junior chosen as the college and amateur golfer of the year

Hovland is the fourth winner from Oklahoma State since the award moved to Colonial, joining Hunter Mahan (2003), Rickie Fowler (2008) and Peter Uihlein (2011). In addition, Hovland is the second European recipient ever, joining Spaniard Jon Rahm (2015, 2016).

Hovland is currently ranked first in three major ranking systems–World Amateur Golf Ranking, Scratch Players World Amateur Ranking and Golfweek/Sagarin Ranking. In addition, he is listed second in the Golfstat College Ranking. Last month, he claimed the Silver Cup as the low amateur at the 2019 Masters Tournament after tying for 32nd place.

Including the Masters, Hovland gained entrance into four PGA TOUR events in 2018-19. Hovland tied for 40th at the PGA TOUR’s 2019 Arnold Palmer Invitational, and also earned starts at the Mayakoba Golf Classic and Farmers Insurance Open.

During college play, the junior recorded three victories, collecting titles at the Royal Oaks Intercollegiate, East Lake Cup and The Prestige. In addition, he has placed among the top 12 in all eight tournaments, including runner-up showings at the Big 12 Championships and the NCAA Louisville Regional. For the season, Hovland boasted a stroke average of 68.59 with 15 of his 22 rounds in the 60s. He shared 11th place at the 2018 NCAA Championship.

The Ben Hogan Award is given annually to the top men’s college golfer taking into account all collegiate and amateur competitions over the past 12 months. The selection committee is made up of 30 leaders and experts in amateur, college and professional golf. In addition, all past Hogan Award winners are eligible to vote in the final round. In order to determine the winner, each ballot cast ranked the group of three finalists, which included Hovland, California senior Collin Morikawa and Oklahoma State sophomore Matthew Wolff.

The Ben Hogan Trophy was first issued by FOG in 1990 at Bel-Air Country Club in Los Angeles and also included academic achievement in its original list of standards. In 2002, the Ben Hogan Award moved to Colonial Country Club in Fort Worth, Texas, Hogan’s hometown and the site of five of his PGA TOUR victories. At that time, it revised its criteria to its current standard of honoring the outstanding amateur and collegiate golfer. In 2005, the tradition of inviting the three finalists began.

In addition to Mahan, Fowler and Uihlein, the Cowboys also had a pair of winners at Bel-Air in Kevin Wentworth (1990) and Trip Kuehne (1995). Both the four winners at Colonial and six overall winners are the most by any school in the country. Hovland is the second straight Big 12 Conference recipient, following Texas’ Doug Ghim.

Since 2002, the Hogan Trophy Award Foundation has awarded more than $800,000 in scholarships to over two dozen schools. This year, nearly $70,000 in grants will be distributed, with $30,000 going to the winner’s university, $15,000 to the two finalists’ schools. Contributions also will be made to the GCAA and the charity of choice of Jon Rahm, this year’s featured guest.

Konica Minolta Business Solutions U.S.A., Inc. is reshaping and revolutionizing the Workplace of the Future™ with its expansive smart office product portfolio from IT Services (All Covered), ECM, Managed Print Services and industrial and commercial print solutions. Konica Minolta has been recognized as the #1 Brand for Customer Loyalty in the MFP Office Copier Market by Brand Keys for 12 consecutive years, and is proud to be ranked on the Forbes 2017 America’s Best Employers list. The World Technology Awards recently named the company a finalist in the IT Software category. Konica Minolta, Inc. has been named to the Dow Jones Sustainability World Index for six consecutive years. It partners with its clients to give shape to ideas and work to bring value to our society. For more information, please visit: www.CountOnKonicaMinolta.com and follow Konica Minolta on Facebook, YouTube, LinkedIn and Twitter.