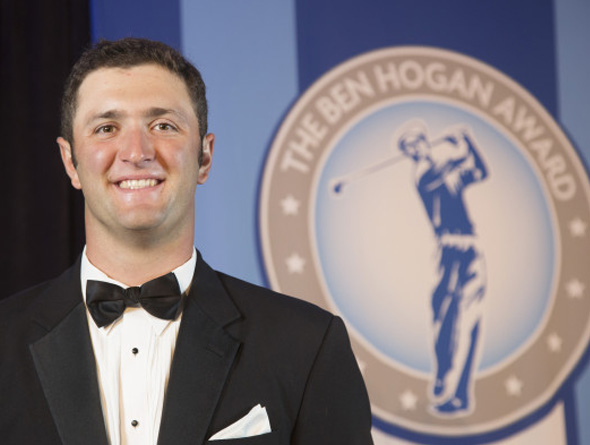 2015FORT WORTH, Texas (May 23, 2016) – Colonial Country Club, Friends of Golf (FOG) and the Golf Coaches Association of America (GCAA) have announced that Arizona State senior Jon Rahm is the 2016 winner of The Ben Hogan Award presented by Konica Minolta Business Solutions U.S.A., Inc. (Konica Minolta). He becomes the first player ever to win the award more than once.

Rahm was crowned the winner over fellow finalists Maverick McNealy of Stanford and Beau Hossler of Texas at a black-tie banquet at Colonial Country Club prior to the start of the PGA TOUR’s Dean & DeLuca Invitational. All three finalists were ranked among the top six in all four major ranking systems–World Amateur Golf Ranking, Scratch Players World Amateur Ranking, Golfweek/Sagarin Ranking and Golfstat Individual Ranking.

Rahm is the world’s top-ranked amateur according to the World Amateur Golf Ranking, Scratch Players World Amateur Ranking and Golfweek/Sagarin Ranking. He also ranks third in the Golfstat Rankings.

The senior has secured top-10 placements in all 12 collegiate events for the Sun Devils this year. He is tied for second nationally with four victories, which includes wins in three of his last four starts. The senior, who carries a 69.38 scoring average and won the Pac-12 Championships by four strokes, was named first-team All-Pac-12 Conference. Last week, he won the NCAA New Mexico Regional by five shots to help Arizona State to a team victory and a berth in the NCAA Championships.

Last summer, Rahm won the Spanish Amateur individual title, advanced to the quarterfinals of the U.S. Amateur Championship and tied for eighth at the European Amateur Team Championship. The native of Barrika, Spain, also competed for Team Europe at the 2015 Palmer Cup, and was named the winner of the 2015 Mark H. McCormack Medal.

In November, Rahm notched his second career top-10 PGA TOUR finish by sharing 10th place at the OHL at Mayakoba Classic. He also made the cut in another event on the TOUR, tying for 64th at the 2015 Travelers Championship.

The Ben Hogan Award is presented annually to the top men’s NCAA Division I, II or III, NAIA or NJCAA college golfer taking into account all collegiate and amateur competitions during the 12-month period dating from the previous award’s banquet. The selection committee is made up of two dozen leaders and experts in amateur, college and professional golf. In order to determine the winner, each committee member cast a ballot that ranked the finalists from 1-3.

The award was first presented in 1990 through the Friends of Golf and Bel-Air Country Club and included academic achievement in its original list of standards. Its criteria was revised for the 2001-02 collegiate season to its current standard of honoring the outstanding amateur collegiate golfer and the award was moved to Colonial Country Club.

With Rahm’s wins in 2015 and 2016, a player from the Pac-12 Conference has won The Ben Hogan Award five consecutive years. Arizona State joins Oklahoma State (3), Washington (2) and Clemson (2) as schools honored more than once since 2002.  Rahm is playing as an amateur in this year’s US OPEN at Oakmont.